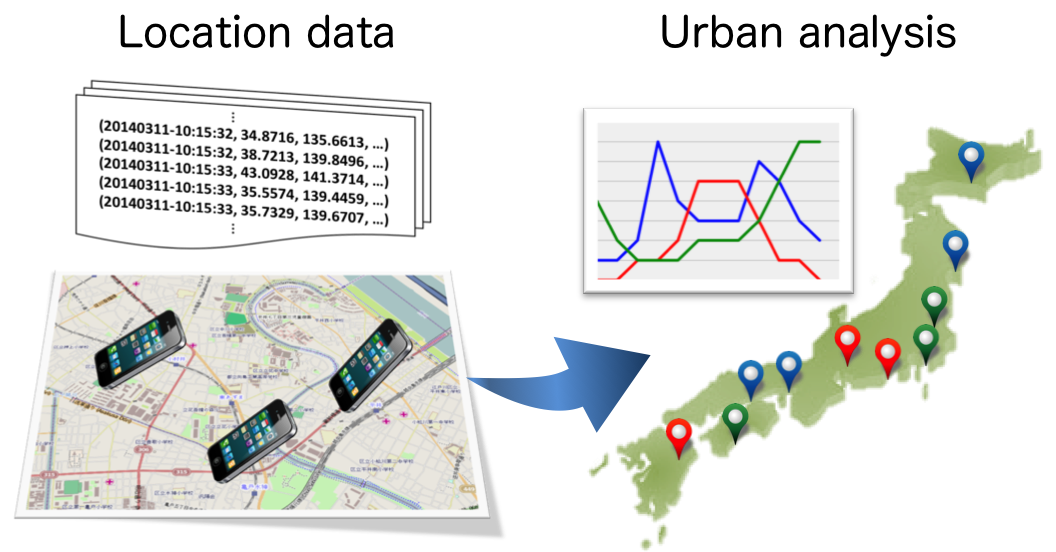 Smartphones are becoming more widespread, in recent times, and their users upload and accumulate large scale location data. Thanks to their population-scale location history data, analyzing urban (population) dynamics encourages data-driven urban city design. This is what we call a “smart city”.

For example, we have developed technology to estimate population volume (traffic census) based on accumulated location data [Nishi+@SIGSPATIAL2014]. Traffic census is usually conducted by survey crews using tally counters. Our technique could be an alternative to such manual census.

You may think that if you have large-scale location data from over one million users, that it would easy to estimate population volume. However, it is difficult to estimate accurate population volume if the target area and target time are small, because of data sparsity. We developed technology to resolve such problems, and achieved high-accuracy traffic census, which is adaptable anytime and anywhere. We also achieved estimation of the number of pedestrians only by eliminating data from non-pedestrians. This was done by estimating transport modes from anteroposterior location data.

The second example is a technique to extract land-use patterns based on location data by area.[Nishi+@Urb-IoT2014]. By sharing area specific patterns between the similar area, the accuracy of pattern extraction is expected to become higher. Therefore, we proposed a model that simultaneously optimise pattern extraction and area clustering [Shimosaka+@ECML-PKDD2016].

The land use characteristics are reflected by “when” and “how many” people use the areas. The land-use patterns discovered from location history data would be helpful for event planning, new shops location, outdoor advertisement, and so on. The land-use patterns also contribute higher-accuracy population volumes estimates where the location data are sparse.